What a simple solution to something I’m pretty sure annoys most users of both iPhones and iPads… It gets my vote to be included in the next iOS release.

It was only a matter of time before print started to ‘go digital’, and I’m not talking QR codes… With Layar’s offering of augmented reality you can use an app with your printed material (I know, still a bit clumsy, but you need a screen somewhere) and various triggers within the print allow you to interact with it. Whether its additional content, like clicking the ‘red button’ with tv, or just the ability to ‘Like’ something it does pull up some interesting questions about the future of print. Will the only way we read something be if we can interact with it? Maybe, but in contrast to Kindles and the like, at least this is trying to combine the two, rather than wipe the other out…

For Benga’s new video for I Will Never Change, 960 separate pieces of vinyl were carefully measured, cut, and then finally animated. The result is a real-life waveform. Directed by Christopher Barrett and Luke Taylor of Us they describe the process in an interview on Creative Review like this –

“To animate the wave form, we built it and then carefully removed each individual record. This had to be done very gently as any shift in the position of the sculpture would result in the failure of the animation and as we had to literally destroy each piece of vinyl to get it off, there was only one chance to get it right. Once the sculpture was finally built, the animation process took about 30 hours.”

The final result is well worth the effort!

You can see more of their work on their site – www.weareus.co.uk

‘Welcome to the Anthropocene’

Beautiful animation created by Globaïa for the short film ‘Welcome to the Anthropocene’, a commission for the Planet Under Pressure conference. Showing every road, flight path and shipping route in the world you know from the start its going to be pretty spectacular. Watching the rotating globe is strangely hypnotic, but my favourite part of the video is when they remove the earth to show an ‘elastic band ball’ of our travel paths. Although I do find it very similar to the BBC’s ‘Every Death On Every Road’ project (which you can see here), as it’s gone a step further I can overlook that…

You can read more about this project here, and see more of Globaïa’s work here

Google Project Glass: a new way to see the world

Following on from Microsoft’s ‘Productivity Future Vision‘ video late last year (which you can see in my post here) this is Google’s version of how the future will play out with their ‘Project Glass‘. Here’s how The Guardian described it –

“The video, ominously titled “One Day …” depicts what a day in the life of a Google glasses-wearer would be like. Shown literally through the eyes of a hip downtown New Yorker, the video starts with the glasses booting up. A series of icons flash into his field of vision, Terminator-style. He checks his calendar and the weather, chats and shares photos with friends in his circles (remember that week we were all active on Google+?) and listens to music.”

Personally the guy in the video annoys me a little, and the idea of that being the future scares me a little more, but all in all an interesting concept and a nicely made video to promote it. I can’t help but think it’ll be a bit like most of the products they used to show on ‘Tomorrow’s World’ though, that never actually made it into public consumption…

Combining the latest in 3-dimensional prototyping technology with sublime typographic art, johnson banks have created Arkitypo: 26 letters, or 26 typographic sculptures, each exploring the character and history of an individual font.

The Arkitypo project developed as a collaboration with digital media and design college Ravensbourne, and acts as a showcase for the college’s prototyping skills and technology. The result is sheer visual delirium, from the “fractalised” Akzidenz Grotesk via the lace-like pipework of Johnston to the Vorticist collision of Zig Zag. Arkitypo took over six months to complete, and was the product of considerable research and practical experiment. And when examined in complete rotation, the results are all the more surprising and inspiring.

Emilio Gomariz’s experiments with the Adobe Illustrator professional work space. Looks great, but I bet it took a while to set up!

Beautiful project by Bartholomäus Traubeck. Using a modified turntable he’s converted the data from the rings found in slices of trees into piano music. It sounds pretty nice too!

I’ll leave explaining the technical side to him-

“A tree’s year rings are analysed for their strength, thickness and rate of growth. This data serves as basis for a generative process that outputs piano music. It is mapped to a scale which is again defined by the overall appearance of the wood (ranging from dark to light and from strong texture to light texture). The foundation for the music is certainly found in the defined ruleset of programming and hardware setup, but the data acquired from every tree interprets this ruleset very differently.”

You can see more of his projects on his site here 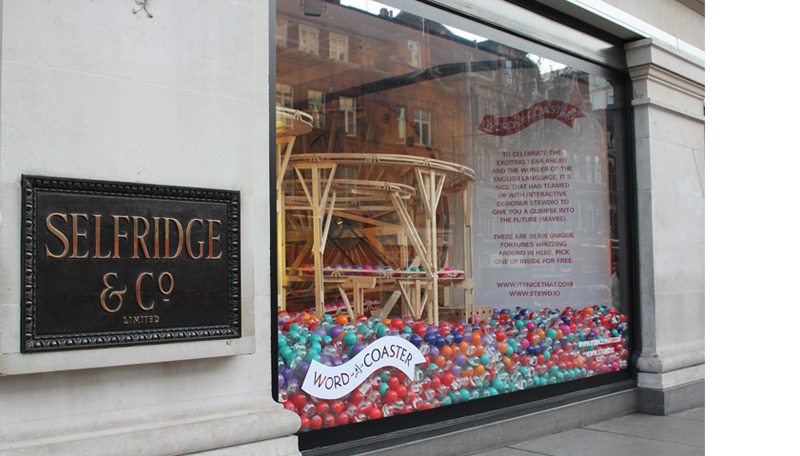 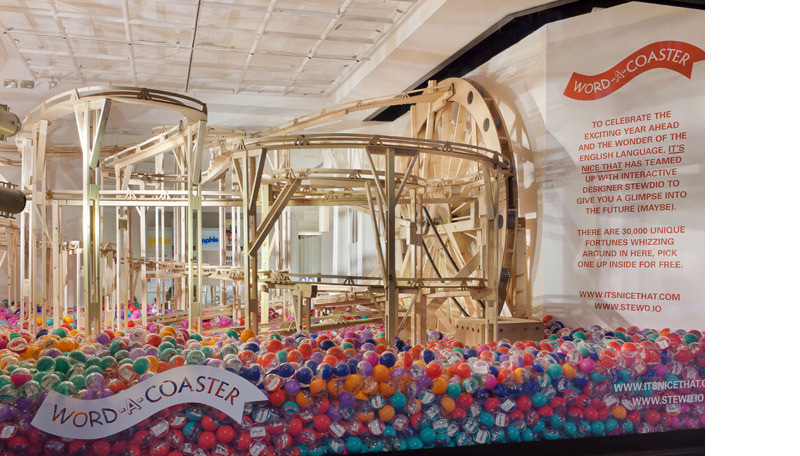 Selfridges new store wide initiative is an homage to Words! With the likes of Faber Publishing and The Idler Academy providing talks and poetry readings, as well as handwriting analysis (which I’m especially interested in, as mines terrible) it looks like they’ve got it pretty well covered. As always though, what I’m most interested in is the window displays, this time provided by the clever people at It’s Nice That. I have to say that I’m not as keen on the supporting windows, but I think the main display is a really nice idea. Shown above, it brings a playfulness to what could otherwise be seen as quite a boring subject by many. It’s Nice That explain it like this:

“For the showpiece corner window of Oxford Street and Orchard Street, we have collaborated with interactive designer Stewdio to create ‘The Word-A-Coaster’ a playful fortune telling machine. The 14 foot high hand-built wooden rollercoaster (constructed by model makers Atom) is surrounded by a sea of 30,000 brightly coloured balls filled with 30,000 unique fortunes that can be picked up in store for free.

Inside the balls, shoppers will find a small card emblazoned with a uniquely numbered adjective, generated by a clever computer programme that leaves each individual with their own personal, playful prediction for 2012.” 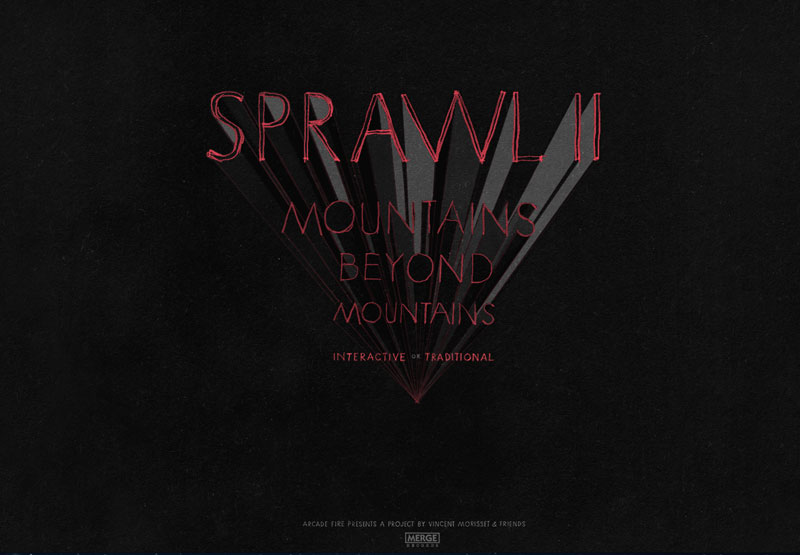 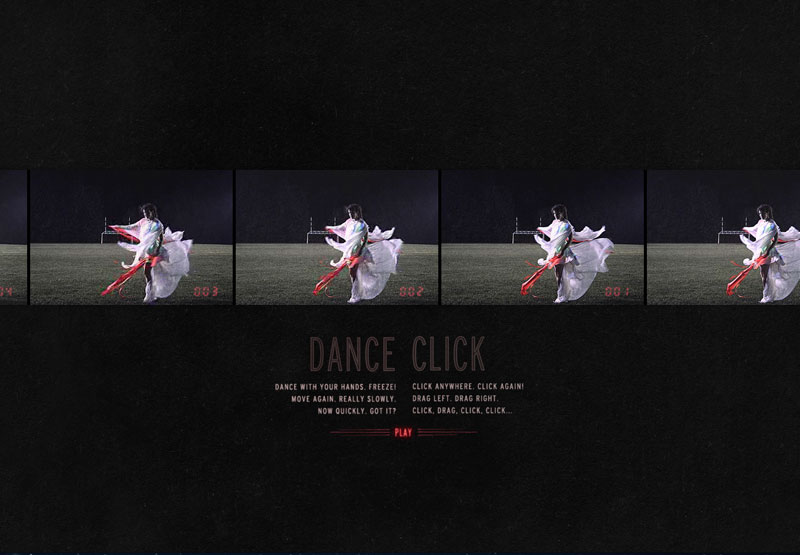 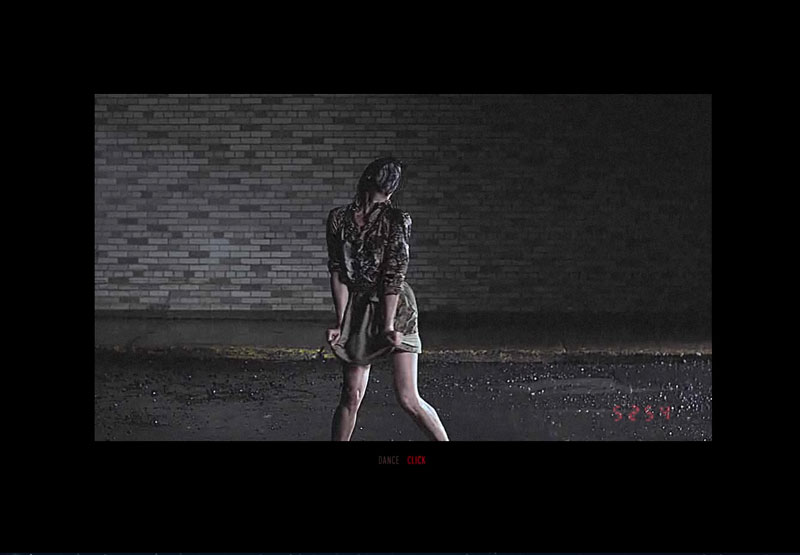 Following on from the success of their ‘The Wilderness Downtown’ interactive video Arcade Fire have teamed up with Vincent Morisset to create a new site promoting their track Sprawl II (Mountains Beyond Mountains). As the video plays the user can either interact with it by dancing in front of their webcam (well, waving at least…) or by clicking and dragging with their mouse. With some dancing perfectly choreographed for the project you can have a lot of fun dragging the video around and clicking the dancers into a jolting stand still.

Have a play here

And be sure to check out more of Vincent Morisset’s projects on his site here (I especially like ‘Neon Bible’, also for Arcade Fire)